Winnsboro became a Texas Main Street City in 2003 and has since been recognized for several notable achievements.  Resortation of many older downtown buildings provides a charming small-town appeal.  Winnsboro’s downtown are offers a great variety of things to do for people of all ages with antique shops, day spas, flower shops, boutiques, hardware, unique shops and wonderful restaurants.  Market Street just north of the depot holds Winnsboro’s rich history known as “The Bowery” which – in its day – was complete with saloons, gambling halls and bath houses catering to loggers.  The Bowery is now home to several fine restaurants, Winnsboro Center for the Arts, small boutiques, and much more.

Knows as the Home of the Autumn Trails since 1959, Winnsboro celebrates the beauty of fall every October.  The entire month is filled with arts and crafts, parades, antique cars and a trail ride through the scenic countryside.

Bring your friends and family to spend a weekend, or a lifetime.

Winnsboro - The "Crossroads of East Texas 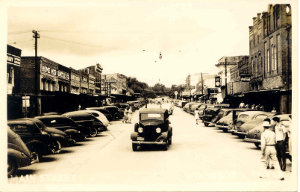 Winnsboro has a rich and varied history that extends from the days of the Caddo Indians to the French settlements and from the wild logging era to the rather calm visits of Bonnie Parker and Clyde Barrow.

The land on which the town is located was first surveyed in 1835, by Gray B. King and carved from the State of Caohuila and Texas, then a state under the Mexican government.  The location is astride the boundary between the Louisiana Territory and Old Mexico and equidistant from Dallas, Shreveport, and Texarkana.

The first settlers, John E. Winn and W.R. McMillan, came to Winnsboro prior to 1854.  They came through "Crossroads", the original name of the town, were attracted to the rich land on the edge of the piney woods, and purchased 351 acres in the Gray B. King tract.  They opened the first post office in 1855, along with their mercantile business.  The town Crossroads was open for business. The citizens soon changed the name to "Winnsborough" in honor of the original founder.  It retained that spelling until 1889, when the government changed the spelling to "Winnsboro".

The original crossroads were approximately three blocks to the North at Main and Pine Streets.  When the railroad arrived in 1898, the main intersection naturally migrated to the South.

Today, Winnsboro is a quiet East Texas community of 3,584 citizens.  It remains the "hub", or centralized location, for many other East Texas cities starting with Greenville to the West, Mount Vernon to the North, Pittsburgh to the East, and Quitman and Mineola to the South.